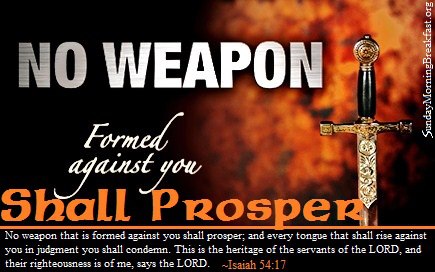 I declare over your life today that
“No weapon that is formed against thee shall prosper; and every tongue [that] shall rise against thee in judgment thou shalt condemn. This [is] the heritage of the servants of the LORD, and their righteousness [is] of me, saith the LORD”
(Is. 54:17 KJV).

What is a declaration? It is a formal, explicit statement or pronunciation or proclamation. The bible says God’s word is forever settled (Psalm 119:89). Therefore this declaration or statement (Is. 54:17) regarding God’s protection of you because you are His is settled! Just receive it and meditate over it, read it out loud, sing it over yourself because your God who wars on your behalf, delights in you and sings over you!

“The Lord your God is with you,the Mighty Warrior who saves.He will take great delight in you; in his love he will no longer rebuke you,but will rejoice over you with singing” (Zeph. 3:17 NIV).
To God be the glory great things He has done!

The Lord says to you as He did to the children of Israel, this is your heritage:

1.”No weapon that is formed against thee shall prosper…”

What is a weapon in this context? Anything that Satan uses to attack God’s people is a weapon. These include:

i.Objects such as talismans, voodoo dolls and amulets used in witchcraft and the occult.

ii.Human agents (by action or words)

Some people whether they are in the church or outside of it do not even realise they are being used as weapons. As we abide in Christ and He in us, our prayer is that we will strong in the LORD and in the power of His might so that we are not used by Satan and his demons.

If the weapons used against you do not prosper it is also true that the works or outcome of those diabolical weapons if they manage to manifest at all are powerless against you by almighty God. This is because you have the authority through Christ Jesus to withstand them. Jesus spoke of the fact that Satan has been defeated and that he has empowered his disciples which you are today:
“And he said unto them, I beheld Satan as lightning fall from heaven.19Behold, I give unto you power to tread on serpents and scorpions, and over all the power of the enemy: and nothing shall by any means hurt you” (Luke 10:18-19 KJV).

“Nay, in all these things we are more than conquerors through him that loved us.”(Romans 8:37KJV)

Satan’s weapons and their works cannot stand or prosper because you are in right standing with God (righteous) and prospering in Him.

“2Beloved, I wish above all things that thou mayest prosper and be in health, even as thy soul prospereth.(3 John 1:2 KJV)

Will you grasp these truths if you have not already and walk in the freedom that is your heritage as a child of God? If you have already done so it is time to be even more vigilant as you prepare to enter into the new year!

2.”…every tongue [that] shall rise against thee in judgment thou shalt condemn..”

As one empowered by the Holy Spirit you are a powerful weapon in God’s hand for you have the power to condemn the enemy who attempts to condemn you!

As one who is righteous, empowered by the indwelling Holy Spirit who makes intercession for you and through you according to the will of God, your earnest prayers “has great power and produces wonderful results” (NLT). Just take a moment to reflect on that!

Words released out of someone’s mouth a “Human satanic weapon”, which has condemned you, given you a negative picture of who you are and resulted in a sustained low self esteem even since your childhood are powerless once you come to Christ. Why? Because God’s words are the most powerful words which counteract, reverse and thwart the words that have been spoken against you since birth.

As you meditate on the word of God and declare it out loud as one in fellowship with the Holy Spirit who is the power of God,

-the voice of God is released in the atmosphere in all its power
-the testimony of Jesus (who is the Word of God) is made manifest.

Satan and his demons have no choice but to flee from the life of one who lives in the presence of God. This is because as a weapon and a mouthpiece of the almighty God, you are His “Battle Axe” (Jer. 51:20) or an instrument of His anointed voice and Holy Spirit that breaks demonic yoke and bondages.

If you believe that God’s words come to pass (Isaiah 55:10-12), then it means you also believe that they replace  and so withstand the words of the enemy against you.  This is what Jesus came to do, to engage in a divine exchange. When he died on the cross, he took on every curse, the written and spoken ordinances against you.

“14Blotting out the handwriting of ordinances that was against us, which was contrary to us, and took it out of the way, nailing it to his cross;15[And] having spoiled principalities and powers, he made a shew of them openly, triumphing over them in it ”(Col 1:14-15 KJV).

This is why it is important to meditate on God’s Word (the bible) over and over again and to declare them out loud. In so doing your heart (your innermost being of moral activity, your soul) comes in agreement with God’s word of truth, His predestined identity and destiny for you. There is therefore a renewal of mind and so an exchange of the lies and false presumptuous about life and who you are.

Every plan or scheme of satan through his “principalities, powers and the rulers of the dark world, spiritual wickedness” (KJV) is thwarted by almighty God who is the LORD of the heavenly armies (angels) in Jesus’ mighty name!

Brethren, let us therefore continue to be steadfast in abiding in God through our Lord Jesus Christ because in so doing, we allow God through His Word and by His power to condemn and render null and void all of Satan’s weapons, schemes and plans against us.

Thus living a life that daily bears witness to the LORD “who bringeth the counsel of the heathen to nought: he maketh the devices of the people of none effect.11 The counsel of the Lord standeth for ever, the thoughts of his heart to all generations” (Psalm 33:10-11 KJV).

Blessed are you “whose God is the Lord; and the people whom he hath chosen for his own inheritance” (Psalm 33:12 KJV).