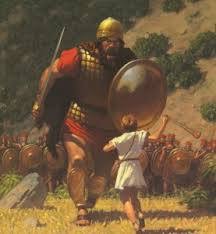 The difficulties you are going through on a daily basis in which God teaches you to be patient and gives you the natural and spiritual courage or strength, skills or gifts, know-how or strategies, I sum up as “Tools” which are necessary for you to overcome are extremely vital. This is because they manifest either within your nature (courage/strength) or as skills, know-how or strategies when greater afflictions or tribulations come your way.

These “Tools” may not necessarily be for use in your circumstances alone but to help others. We are always equipped by God not just for ourselves but others in mind, such is our God of deliverance and relationship who loves His people and works through them for each other’s sake.

David comes to mind in relation to the above. He had been trained by God to defend the lambs he kept from attack by the lions and bears and he was also able to kill them when they turned on him. Such skill and courage was acquired by David the youngest son, when he was ‘a nobody’ and inconspicuous. When God’s appointed time came for him to publicly display his skills and courage he was ready!

With courage David said to King Saul “32 Don’t worry about this Philistine,” David told Saul. “I’ll go fight him!” (1 Sam. 17:32 NLT).
Saul told David not to be ridiculous and that he was only a boy, while Goliath had been a man of war since his youth.

Goliath terrified the army of Israel because he was a giant and taunted them so that no one attempted to fight him individually, but David was ready for him. If as a boy he was able by God given strength and courage to fight off and kill lions and bears, he knew he would be able to kill Goliath. His age and lack of military training was not an obstacle for God in his great power who is Himself a man of war or Jehovah Gibbor, the LORD of the armies of heaven or Jehovah Sabaoth was the one at work through him. David had complete trust in God.

David said to Goliath before he killed him,”45 …You come to me with sword, spear, and javelin, but I come to you in the name of the LORD of Heaven’s Armies—the God of the armies of Israel, whom you have defied. 46 Today the LORD will conquer you, and I will kill you and cut off your head. And then I will give the dead bodies of your men to the birds and wild animals, and the whole world will know that there is a God in Israel! 47 And everyone assembled here will know that the LORD rescues his people, but not with sword and spear. This is the LORD’s battle, and he will give you to us!” (1Sam. 17:45-47 NLT).

Are you unknown to many or in a lowly state or looked upon as such? Whether yes or no, God is outworking great things in and through you (a change of heart, giving you the “Tools”) as in the case of David in preparation for greater confrontations with the enemy for your sake to fulfill your destiny and also for the sake of multitudes.

David understood this of God and so should we in whatever task we undertake even if it seems insurmountable “For God is working in you, giving you the desire and the power to do what pleases him.” (Phil. 2:13 NLT).

When God’s appointed time comes, and He needs someone to be a “General” for a greater battle or to lead a specific high profile situation with the skills, strength and courage, you will always qualify. In fact God has predestined you for such tasks which is why He prepared you in the small things and also in hiddenness. Perhaps God has used you already mightily before men after preparing you in hiddenness or in small ways. I have a message for you which is that this is a cycle, as long as you see yourself in a position of preparedness consistently and obediently comply to God’s will, you will always be equipped with the “Tools” and so qualify to be used for greater and high profile God given tasks. What God will use you for will, as in the case of David, not only benefit multitudes and even preserve life but result in God given rewards.

“I pray that you will understand the incredible greatness of God’s power for us who believe Him. This is the same power that rose Jesus from the dead…” (Eph.1:19-20 NLT).

I also pray that you will always remember that you can do all things through Christ who strengthens you (Phil. 4:18). You are guaranteed victory in all you do and marked for greatness because you are a child of God.